skip to main | skip to sidebar

Welcome to Upstate Bouldering, designed around bouldering in the Upstate region of South Carolina. This website is intended to inform the reader of local spots in SC, Western NC and Northeast GA, as well as a blog of my experiences climbing at these great spots. I hope everyone learns of a new place to climb or is inspired to climb somewhere close to them. If you have any comments, please send me an e-mail.

Follow By Email And Get New Posts Delivered To Your Inbox

The Legend Of The Jocassee Gorges Sasquatch 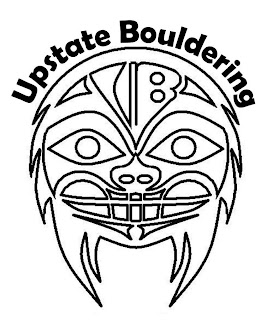 The Legend of the Jocassee Gorges Sasquatch

Back in March when I released the Upstate Bouldering Guide, I eluded to the story or legend of the Jocassee Gorges Sasquatch...a series of odd and unexplainable events that one of my buddies had experienced when he was younger. 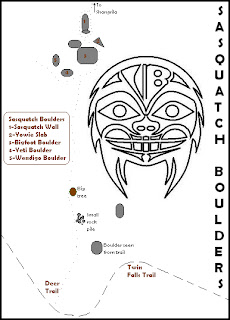 I completely forgot to post that story here on Upstate Bouldering until now!  Visiting the Pacific Northwest every year for the holidays has gotten me a little closer to the origins of the bigfoot/sasquatch legends and culture, with random images and references scattered among Portland and the surrounding area of Oregon.  This particular story was brought back from the depths of my memories while I was developing one of the more remote bouldering areas in the Gorges, soon after visiting the NW. 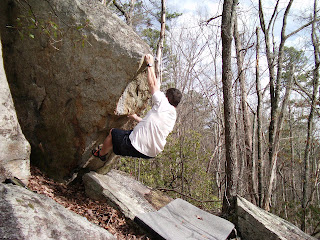 After catching a couple of glimpses of what appeared to be a large furry creature (very well could have just been my mind wandering too), watching me from a distance in the woods, during the initial development of these boulders, I decided to use it as inspiration for the whole area and named the area Sasquatch. Here is a link to the bouldering area and below is the Legend Of The Jocassee Gorges Sasquatch...enjoy:) 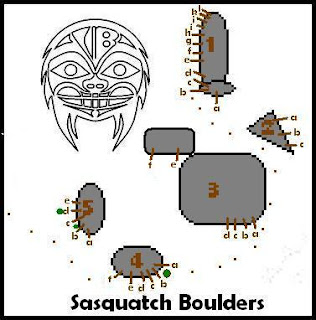 Over 20 years ago, when I first started roaming these hills, I had a friend, Michael, that would always talk about weird experiences he had in these woods since he was a young boy. One particular experience left a clear image in his head of a figure he and his father followed through a remote and isolated area of the Gorges while on a fishing trip once, when he was a younger teenager. He explained that he and his father set out early one morning at the base of Twin Falls, determined to walk the creek upstream to the Narrows, a locally famous fishing hole usually accessed from Laurel Valley on highway 178, about a 20 minute drive away…but what they weren’t aware of at the time is that Twin Falls is on Reedy Cove Creek and the Narrows are on Eastatoee Creek. It was a common misnomer for folks to call Twin Falls, Eastatoee Falls before the falls become more popular and more information became available. So, Michael and his dad were destined to never find the Narrows in the first place. After bushwhacking upstream a few miles from Twin Falls, to the point where Reedy Cove Creek is dammed to create the lake at McCall’s RA Camp, they realized their mistake and turned around to head back to Twin Falls. 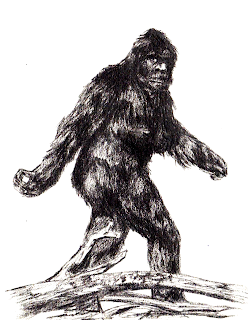 On the way back though, they decided to take a detour on an old road bed to try to find a gap or passage over into Eastatoee Creek. After walking for a while, they noticed a few odd footprints in the dried mud beside the now faint and overgrown trail. Confident they had found evidence of other fishermen and the gap over to Eastatoee they were looking for, they decided to get off of the trail and bushwhack to the Narrows…needless to say, after getting off of the trail and not being able to find their way to Eastatoee or back to Reedy Cove, they were completely and totally lost, high on a mountainside, and in a ravine or hollow that didn’t give them any clue as to which way to go. They couldn’t hear the sound of either creek and without a compass or map of the area, they had no clue which way they should travel…panic started to set in over the chance that they could be lost in these hills for days or even weeks without anybody being able to find them. While gathering their wits and trying to remember anything that would give them a clue as to which way would lead them back to their car, they saw a mysterious figure on the ridge above the ravine they were in…it looked to be a very tall gentleman wearing brown coveralls, a typical hunting outfit for the time of year. 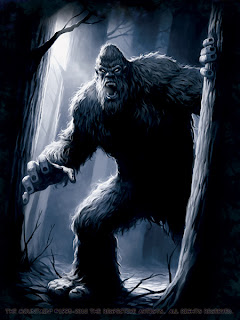 They started to yell for help and guidance as to which way they should go, but the figure just watched them without replying…so they decided to climb their way out of the ravine and onto the ridge to talk to him close up. As they approached the ridge on their way out of the ravine, the figure quickly disappeared off into the distance…so Michael and his dad followed the figure the best they could, all the while trying to get its attention for help. After what seemed like miles of bushwhacking and following quick glimpses of the figure, they found themselves approaching the edge of a deep gorge that dropped over 1000-1500 feet almost instantly…and perched on its edge was the figure, huddled and staring at them. After getting closer to the figure and getting a better look at it, they realized that it wasn’t wearing coveralls at all, but seemed to be covered in brownish grey fur…and it was then that they both thought they were staring at a sasquatch or bigfoot. 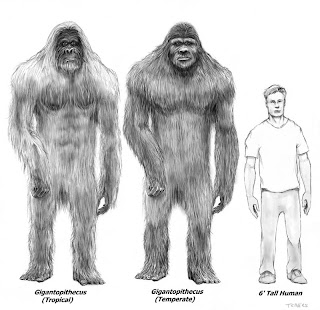 Michael was a pretty skeptical guy and didn’t believe in anything that couldn’t be proven with science or evidence…but right before his eyes, he believed was concrete evidence of a Sasquatch! After the moment of shock wore off, they began to closer approach the figure, still on the edge of the gorge. After they got so close to the figure, it decided enough was enough and the “sasquatch” went over the edge and down the steep slope hopping, jumping and grabbing a hold of trees to slow itself down enough to remain in control. Michael and his dad were in complete shock at their experience and what they had been following…and in fact they were even deeper into the more remote areas of the Gorges! Now with the shock of what they had just experienced and saw, along with the fact that they were even more lost than before, the two of them decided to rest for a moment and gather themselves at the edge of the deep gorge…when things started to get quiet, they heard the faint sounds of what they thought was a waterfall below them, deep in the bottom of the gorge the “sasquatch” had just retreated to. 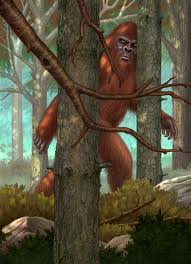 With rejuvenated spirits that they may have just be hiking in circles and wrapped around the mountains and back towards the top of Twin Falls, they began to tackle the steep slope and make their way down into the gorge. Once at the creek in the bottom of the gorge, they started to recognize familiar markers they had seen before…and realized that they had made their way not to the top of Twin Falls, but instead to Eastatoee and an area just below the Narrows! Crossing Eastatoee to heads towards the established fishing trail, they saw their last sign of the figure…another large odd looking footprint on the pebbly beach beside Eastatoee, but this one was fresh. Knowing where they were finally, and with the sun slowly setting, they decided to just hike out to highway 178 and try to hitch a ride back to their car. Luckily, they were able to find someone kind enough to drop them off back all the way back at their car. Overwhelmed by their day and what they had experienced, the memories seemed to be seared permanently into Michael’s mind! I met him only a few years after this experience and he would talk about and recount it often while we were hiking. He didn’t want to believe what he saw was a sasquatch, but he had no other explanation for the figure and would find similar clues at/near the Narrows and other locations in the Gorges…and I was along for a few of them. I am more skeptical than most when it comes to these sorts of tales…I’m a scientist/biologist and I rely on facts and repeatable phenomenon to explain our world, not faith or superstition. 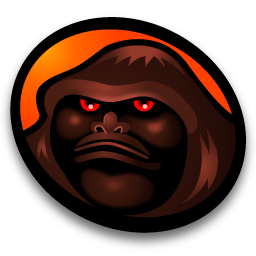 As we began spending more time together hiking and exploring distant areas of the Jocassee Gorges, we occasionally found more unexplained phenomenon…like glowing eyes and odd grunts and howls that would encircle our campsite late at night, at the junction of Big and Little Eastatoee Creeks, on more than one trip. The one time we got up the nerve to chase whatever it was that was watching us, it turned away and rain straight into the creeks making enough splashing noise to wake up people that had already went to sleep. Or the unexplained “village” of woven tree limb/twig tables, chairs and a small hut we found many miles deep in the Gorges, far away from any road and hidden off of a trail. The oddest thing at this specific site was a handmade crutch that was well worn and almost 6 feet tall…much too tall for the average person to use effectively if they were injured. 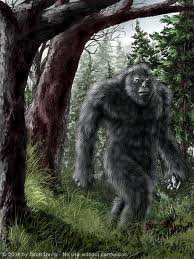 Or the odd carvings on trees and orange dyed drawings of large human like creatures in a cave we used to hang out in near the Narrows. We would always joke about all of these incidences (you could tell it was just our way of dealing with the uncomfortableness of what we couldn’t explain) and the whole time I just didn’t want to think there was any validity to his claims or the incidences I was involved with…but looking back now, on those days long ago…and all of these things I had experienced and couldn’t explain with all the science I could find…could he have been right!?!? As teenage boys are notorious for being gross and telling gross jokes, we would famously claim “Gasquatch” when one of us would pass gas while hiking, but we also started saying it when we couldn’t explain something weird while in the woods…almost to make light of the situation and to break the tension.

Because this was such a part of my initiation into these Gorges, I thought it only fitting to instill the legend of the Jocassee Gorges Sasquatch (and Gasquatch) into these boulders I found so elusive and enigmatic today! I hope you can allow your imagination to take you away in this location…maybe even see a furry figure watching you from a distance…but mainly to allow you to send routes that you didn’t realize your abilities could achieve!

Posted by Brad Caldwell at 3:00 AM 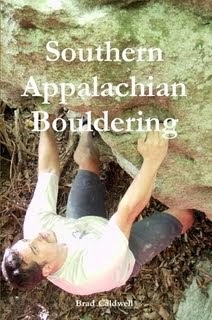 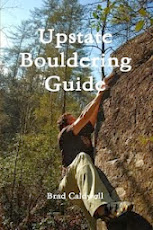 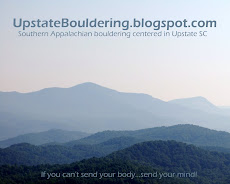 What grade range do you generally climb? Create your own visitor map!

Other Spots To Boulder Nearby

Do It Yourself Projects 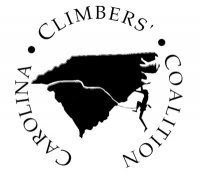 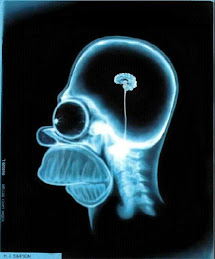